A new film by Jac Avila

Innocent Justine endures extreme torture and violation at the sadistic hands of the Marquis de Sade’s disciples of pain, pleasure and sexual deviance. In this latest artistic rendering of de Sade’s classic novel, Justine’s steadfast faith and naive trust enslave her in a number of perverse practices illustrating that virtue is no match for vice. 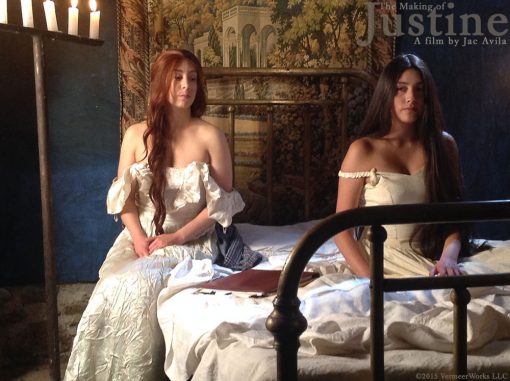 Close your eyes. And step into my dungeon…

Can you hear the screams?

The WAILS of ecstasy!

The CRACK of the whip!

The SQUEAL of the rack!

Welcome to my playground…

You may think you know the story of De Sade’s JUSTINE. But not like this one.

Meet innocent Justine: Beaten, bloody and naked— she’s locked in the stocks after 50 lashes and the abuse of many men. Now, she awaits execution for a crime she did not commit. Or, did she?

Come along with Justine on her deviant journey, as she escapes from prison with a band of thieves, only to be passed into the clutches of various depraved men, who torture and enslave her in bouts of sex and thrilling scandals at the hands of perverted aristocracy.

Until Justine is finally sold into the torture playground of the brutal and sadistic Rodin, who further violates her by inflicting hideous torture upon torture alongside his two reluctant but sex-crazed female servants.

Even Rodin’s own foolish and misled daughter, Rosalie, ultimately becomes a pawn in this sick and twisted game of cruelty, culminating in the ultimate savage sacrifice.

Dead But Dreaming Directed by Jac Avila The year is 1805, the city of Nuestra Señora de La Paz lives in fear of an invasion from the indigenous population, and END_OF_DOCUMENT_TOKEN_TO_BE_REPLACED

A co-production of Pachamama FIlms and Decadent Cinema. Based on the children’s story “La barbe bleue” (1697) written by Charles Perrault. Barbazul, the wealthy owner of a vineyard, loves women… END_OF_DOCUMENT_TOKEN_TO_BE_REPLACED

JUSTINE A film by Jac Avila Close your eyes. And step into my dungeon… Can you hear the screams? The WAILS of ecstasy! The CRACK of the whip! The SQUEAL END_OF_DOCUMENT_TOKEN_TO_BE_REPLACED

Anouk is French, she’s 30, she’s in Bolivia. A massive demonstration is taken place outside the charming café where she’s talking to a friend. Luis, Bolivian, 50, is observing her END_OF_DOCUMENT_TOKEN_TO_BE_REPLACED

A co-production of Pachamama Films and Decadent Cinema. Maleficarum is the story of Francisca, a wealthy orphan and Mariana, her widowed protestant friend, who live surrounded by a town in END_OF_DOCUMENT_TOKEN_TO_BE_REPLACED

As the postmodern world is stormed by an onslaught of religious fundamentalism and resurrected holy wars, Camille, a 21st century young French woman, experiences the passion of a 3rd century END_OF_DOCUMENT_TOKEN_TO_BE_REPLACED