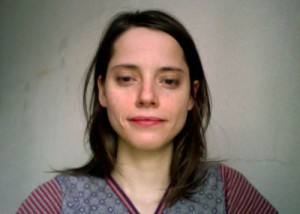 Carmen was born in La Paz, Bolivia on December 6, 1976, from a Bolivian mother and a French father. Her parents moved to France to her father’s hometown shortly after her birth. She grew up and went to school in her hometown of Tours until her return to Bolivia in 1992.

While in Bolivia she met Jac Avila and participated in an intense acting workshop organized by Pachamama Films. She was cast in a dual role in the miniseries El Hombre de La Luna. She continued working with Jac in the production of documentaries as well as modeling in photography and videos until 1997 when she went to New York and later to France.

Carmen continued her studies in acting  and filmmaking in France at the Université St. Denis and at the well-known acting institute Pygmalion, both in Paris. During her studies she participated in the production of shorts at Ki-Films in Paris.

She returned to New York to play the lead role in The Death of St. Eulalia and less than a year later she was back in the Big Apple to work as Assistant Director in the Feature film Nocturnia

Carmen is currently working as a clown in France and in animated films.

Dead But Dreaming Directed by Jac Avila The year is 1805, the city of Nuestra Señora de La Paz lives in fear of an invasion from the indigenous population, and END_OF_DOCUMENT_TOKEN_TO_BE_REPLACED

A co-production of Pachamama FIlms and Decadent Cinema. Based on the children’s story “La barbe bleue” (1697) written by Charles Perrault. Barbazul, the wealthy owner of a vineyard, loves women… END_OF_DOCUMENT_TOKEN_TO_BE_REPLACED

JUSTINE A film by Jac Avila Close your eyes. And step into my dungeon… Can you hear the screams? The WAILS of ecstasy! The CRACK of the whip! The SQUEAL END_OF_DOCUMENT_TOKEN_TO_BE_REPLACED

Anouk is French, she’s 30, she’s in Bolivia. A massive demonstration is taken place outside the charming café where she’s talking to a friend. Luis, Bolivian, 50, is observing her END_OF_DOCUMENT_TOKEN_TO_BE_REPLACED

A co-production of Pachamama Films and Decadent Cinema. Maleficarum is the story of Francisca, a wealthy orphan and Mariana, her widowed protestant friend, who live surrounded by a town in END_OF_DOCUMENT_TOKEN_TO_BE_REPLACED

As the postmodern world is stormed by an onslaught of religious fundamentalism and resurrected holy wars, Camille, a 21st century young French woman, experiences the passion of a 3rd century END_OF_DOCUMENT_TOKEN_TO_BE_REPLACED