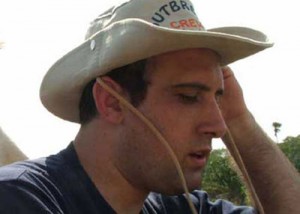 Erik was born in New York City on August 21, 1977. He lived his early years in the U.S.A., Bolivia and Cuba where he was strongly influenced by his artistic family. He studied in Havana, New York City and La Paz and he began writing in his teens and making shorts before he was out of high school.

Erik participated in the acting workshops organized by Pachamama Flims in Bolivia, and landed his first acting role in the mini-series El Hombre de La Luna.

In New York, while attending university, he collaborated in the script and later joined the cast of The Death of St Eulalia and that same year pitch his first script to Pachamama Films for possible production.

On a snowy February morning the shooting of Nocturnia began and Erik directed his first feature film, taking a role in it as well.

In 2005 he began his festival tour with the film and joined the cast of Outbreak Investigation: Curse of the Black Typhus for National Geographic, in which he plays doctor Kuns.

He worked in the production of Sirwiñakuy playing a supporting role.

Dead But Dreaming Directed by Jac Avila The year is 1805, the city of Nuestra Señora de La Paz lives in fear of an invasion from the indigenous population, and END_OF_DOCUMENT_TOKEN_TO_BE_REPLACED

A co-production of Pachamama FIlms and Decadent Cinema. Based on the children’s story “La barbe bleue” (1697) written by Charles Perrault. Barbazul, the wealthy owner of a vineyard, loves women… END_OF_DOCUMENT_TOKEN_TO_BE_REPLACED

JUSTINE A film by Jac Avila Close your eyes. And step into my dungeon… Can you hear the screams? The WAILS of ecstasy! The CRACK of the whip! The SQUEAL END_OF_DOCUMENT_TOKEN_TO_BE_REPLACED

Anouk is French, she’s 30, she’s in Bolivia. A massive demonstration is taken place outside the charming café where she’s talking to a friend. Luis, Bolivian, 50, is observing her END_OF_DOCUMENT_TOKEN_TO_BE_REPLACED

A co-production of Pachamama Films and Decadent Cinema. Maleficarum is the story of Francisca, a wealthy orphan and Mariana, her widowed protestant friend, who live surrounded by a town in END_OF_DOCUMENT_TOKEN_TO_BE_REPLACED

As the postmodern world is stormed by an onslaught of religious fundamentalism and resurrected holy wars, Camille, a 21st century young French woman, experiences the passion of a 3rd century END_OF_DOCUMENT_TOKEN_TO_BE_REPLACED