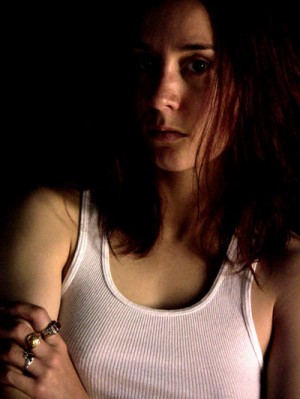 Known for her controversial film, Sirwiñakuy, Amy Hesketh, a native Mainer, joined Pachamama Films in October 2005 to work as an actress on the documentary for National Geographic Outbreak Investigation: Curse of the Black Typhus, in Bolivia. A month later, she saw Jac Avila’s Martyr in a festival and decided she would stay and work with him.

When Sirwiñakuy, a film centering around a sadomasochistic relationship, was released in July of 2010 in Bolivian cinemas, the film caused an uproar among audiences and critics alike. A polemic evolved, in which all parties who saw the film were divided, half loved the movie, the other half hated it. Hesketh was criticized by Bolivian critics for promoting domestic violence in her film. The opposing end of criticism, composed of an equal amount of praise for Hesketh and the film, were the comments and critiques received after Sirwiñakuy‘s debut in New York City at the CineKink 2012 film festival.

Late 2010 Hesketh directed Barbazul (Bluebeard), her second feature film, based on the Charles Perrault story from 1697, about a man who kills his wives. In this film, Hesketh again touches upon sadomasochism and violence towards women, a common theme in her films, explored a third time with her film, shot in 2011, Le Marquis de la Croix, based on the writings of the Marquis de Sade.

Hesketh is also known for her production of and performance in Jac Avila’s controversial film Maleficarum, in which Hesketh stars as Mariana de Castro, a woman tortured and burned at the stake by the Inquisition. In most of the film, Hesketh is portrayed without clothing and tortured by extreme methods. She is praised for her realistic acting in the film.

Continuing her polemic trajectory, Hesketh produced and starred in Jac Avila’s Dead But Dreaming in early 2012, the first vampire film ever made in Bolivia, in which she has a challenging role and challenging scenes.

Presently, Amy is planning to direct a fourth film in 2012, tentatively entitled Adela.

You can read what Amy has to say in her blog HERE.

One Reply to “Amy Hesketh”

Dead But Dreaming Directed by Jac Avila The year is 1805, the city of Nuestra Señora de La Paz lives in fear of an invasion from the indigenous population, and END_OF_DOCUMENT_TOKEN_TO_BE_REPLACED

A co-production of Pachamama FIlms and Decadent Cinema. Based on the children’s story “La barbe bleue” (1697) written by Charles Perrault. Barbazul, the wealthy owner of a vineyard, loves women… END_OF_DOCUMENT_TOKEN_TO_BE_REPLACED

JUSTINE A film by Jac Avila Close your eyes. And step into my dungeon… Can you hear the screams? The WAILS of ecstasy! The CRACK of the whip! The SQUEAL END_OF_DOCUMENT_TOKEN_TO_BE_REPLACED

Anouk is French, she’s 30, she’s in Bolivia. A massive demonstration is taken place outside the charming café where she’s talking to a friend. Luis, Bolivian, 50, is observing her END_OF_DOCUMENT_TOKEN_TO_BE_REPLACED

A co-production of Pachamama Films and Decadent Cinema. Maleficarum is the story of Francisca, a wealthy orphan and Mariana, her widowed protestant friend, who live surrounded by a town in END_OF_DOCUMENT_TOKEN_TO_BE_REPLACED

As the postmodern world is stormed by an onslaught of religious fundamentalism and resurrected holy wars, Camille, a 21st century young French woman, experiences the passion of a 3rd century END_OF_DOCUMENT_TOKEN_TO_BE_REPLACED