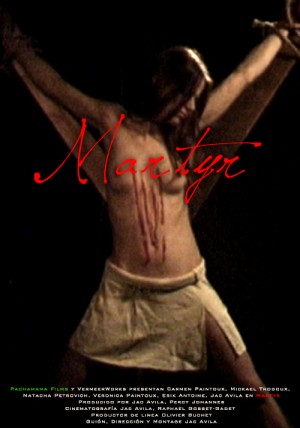 Martyr or The Death of Saint Eulalia – The long awaited movie.

After a long wait. A long wait for many who heard about its existence and were eager to see it, we released Jac Avila’s magnus opus: Martyr or The Death of Saint Eulalia.

Martyr is the story of Camille, a young French woman visiting New York with Julien, a hot DJ and her boyfriend.

Camille inspires Tadeusz to work on a series of photographs depicting the Martyrdom of St. Eulalia, a the Sanish martyr from the third century. Camille has been obsessed with this saint since her childhood.  When she meets Tadeusz she knows she finally has the chance to fulfill a long lasting wish, to live the martyr’s experience.

Martyr was produced in New York, shot on location in Long Island City and Central Park.

Tadeusz, the photographer, is played by Jac Avila himself, who also played a lead character in El Hombre de la Luna.

Julien is played by Mickael Trodoux in his first acting role. he was cast in France.

Other characters in the film are: Elisa, the photographer’s assistant, played by Natacha Petrovich, also cast in France. Then there’s Gabrielle, the photographer’s model and lover played by none other than Veronica Paintoux who later paired with Jac in Sirwiñakuy and Barbazul.  Another character is Dave, Julien’s roommate and landlord.  He’s an aspiring writer who plays with guns.  Dave is played by Erik Antoine, a new yorker, filmmaker, scriptwriter who played Anouk’s ex-boyfriend in Sirwiñakuy and Paul the photographer in Barbazul.  He’s also a priest in Maleficarum.  He’s the director, writer and lead in Nocturnia.

Martyr was screened in a few festivals, it was the subject of a conference in Siena University in New York and finally, in April 7th, 2011, was officially released with a exclusive engagement at the Cinemateca Boliviana.

Martyr is available in DVD and for Downloads at VermeerWorks 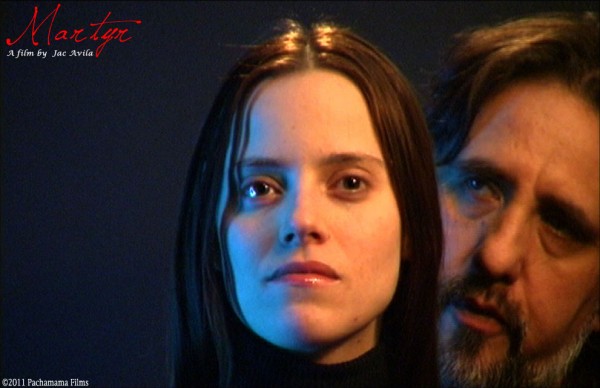 Carmen Paintoux and Jac Avila in a scene of Martyr

Dead But Dreaming Directed by Jac Avila The year is 1805, the city of Nuestra Señora de La Paz lives in fear of an invasion from the indigenous population, and END_OF_DOCUMENT_TOKEN_TO_BE_REPLACED

A co-production of Pachamama FIlms and Decadent Cinema. Based on the children’s story “La barbe bleue” (1697) written by Charles Perrault. Barbazul, the wealthy owner of a vineyard, loves women… END_OF_DOCUMENT_TOKEN_TO_BE_REPLACED

JUSTINE A film by Jac Avila Close your eyes. And step into my dungeon… Can you hear the screams? The WAILS of ecstasy! The CRACK of the whip! The SQUEAL END_OF_DOCUMENT_TOKEN_TO_BE_REPLACED

Anouk is French, she’s 30, she’s in Bolivia. A massive demonstration is taken place outside the charming café where she’s talking to a friend. Luis, Bolivian, 50, is observing her END_OF_DOCUMENT_TOKEN_TO_BE_REPLACED

A co-production of Pachamama Films and Decadent Cinema. Maleficarum is the story of Francisca, a wealthy orphan and Mariana, her widowed protestant friend, who live surrounded by a town in END_OF_DOCUMENT_TOKEN_TO_BE_REPLACED

As the postmodern world is stormed by an onslaught of religious fundamentalism and resurrected holy wars, Camille, a 21st century young French woman, experiences the passion of a 3rd century END_OF_DOCUMENT_TOKEN_TO_BE_REPLACED